Maio is an island of space, tranquility and hospitality. The beaches are endless and virtually untouched, with beautiful white sand and crystal clear, warm waters. Due to its raw natural landscape, turtles choose the beaches of Maio to lay their eggs – influencing a culture of preservation among the locals for the species and for the island. Fishing villages produce an abundance of seafood variety from tuna to coral fish. The island of Maio is the most eastern of the Leeward (Sotavento) group of the archipelago to the east of Santiago and south of Boavista.

Island almost entirely surrounded by beaches of white thin sand contrasting with the blue of the crystaline warm waters. Praia Preta, Praia Real, Pau Seco, Porto Cais and Boca do Morro are some of the most well known. Visiting Maio means to shelter oneself in an almost wild world which invites to rest and to embark in a diving adventure to enjoy the extremely rich maritime fauna. Very common and seasonal is the appearance of turtles that choose these pure beaches to spawn.

Although stark, stockbreeding has a significant expression and even nowadays the capture of wild donkeys in a sort of rodeo is a highly appreciated event.

From the airport to Vila do Maio (Maio Village), the main urban center, the distance traveled offers a view over the salt works that were an important economic resource in the past and are now abandoned.

Vila do Maio, known as Vila do Porto Ingles (British Port Village) due to the continuous presence of British boats which in the past transported the salt, is dominated by the peace and quiet its inhabitants make a point of preserving. Its main monuments cannot be over looked, for they marked the history of the development of the island: the grandiose Igreja Matriz (mother church), Maio’s Castle (built in the XVIII century as a defense against pirates) and Farol de Sao Jose (Sao Jose Lighthouse). Other interesting places include, a little up to the north, Calheta, a fishing village with a charming bay and home to the largest forest area of the country made up of acacia trees, refuge to the only wild fauna, the “galinha do mato” (hazel grouse).

The pottery center is also admirable and there the visitor can observe and buy remarkable examples of the Cabo-verdean handicraft tradition. More to the north, towards the interior, another small and peaceful village – Cascabulho – reveals its wonderful handicraft, this time in tapestry.
Beaches

There are beaches everywhere and in particular the one in Ponta Preta is preferred by tourists. Praia Real, Pau Seco, Porto Cais and Bitche Rotcha, the latter facing Vila, are much frequented by wind-surfers and other nautical sports enthusiasts.

Calheta
Cradle of the fishing industry, a village which lives entirely on fishing. The boats arrive daily, loaded with the best fish available, as well as sea-food, especially lobster and octopus. The beauty of the region, however, is striking for the fantastic bay which spreads before the visitor. And it is at Calheta that the greatest extension of forest can be found, abounding in acacias, and which supports a small unit of charcoal production. Half-way is the beautiful Boca d’Morra beach, where there is a small tourist village.

Cascabulho
In the north of the island, this locality has become famous, although it has no beaches, as the place where in ancient times dead whales appeared, giving rise to a song. The whales arrived on the nearby beach of Porto Cais, where many ships were wrecked on the rocks in the area. Two of these ships are still visible today.

Traditional feasts
There are many, in all the villages and it is a hard choice. In almost all the feasts, the central attractions are the Tabanka, Batuko, Rabecca (violin) dances, accompanied by an abundant helping of braised goat and xeren. Most important are the feasts of Cristo Rei on November 21st, Nha Santa Maria on July 26th and Sao Jose on June 19th.

A relaxing island
A twelve-minute flight separates the capital of the country, Praia, from the island of Maio. From the air, the island resembles an egg-shaped star with beaches on all sides and a small number of dwellings in the center where approximately 5,000 people live in an area of only 269 square kilometers. On the road to the hotel, the first impression one receives is that of tranquility and, day-by-day, the tourist is persuaded that “noise” is a word that does not exist in the vocabulary of these islanders.

To stay on the island of Maio means refuge in one of the quietest places on earth, where at hundreds of meters from the sea, the only sound from dawn to dust is the lapping of the waves on the shore. The beaches stretch around the scattered existing villages, and one is more beautiful than the other, but all have the same charm: fine white sand, waters which are crystal-clear and warm all year long.

Although the island is essentially a desert zone, here and there oases are to be found. The rearing of animals, once the most important occupation, remains on of the principal economic activities of the population. Even today, the capture of a wild donkey, a real rodeo, is an event much appreciated by tourists. With waters abundant in fish and sea-food, fishing is undoubtedly the main occupation of the islanders.

Vila do Porto Ingles, name given for the frequency of English ships in search of salt, is the capital of the island and is attractive for its colored houses, the straight and tidy roads, buildings such as the principal church Igreja Matriz, and the Farol de S.Jose for its total tranquility. It is close to the one of the greatest beaches in the country: the Bitche Rotcha. The visitor is struck by the hospitality and warmth of a people so capable of making a welcome, an intrinsic nature of the population since most remote times, when the islanders offered visitors a “queijo di terra” (homemade cheese).

Calheta the cradle of the fishing industry, a village which survives entirely on fishing. The boats arrive daily, loaded with the best fish available, as well as seafood, especially lobster and octopus. The beauty of the region, however, is striking for the fantastic bay which spreads before the visitor. And it is at Calheta that the greatest extension of forest can be found, abounding in acacias, and which supports a small unit of charcoal production. Halfway is the beautiful Boca d’Morra beach, where there is a small tourist village.

Traditional folkloristic feasts are celebrated all year round, during which it is possible to taste the numerous typical dishes, which in the various villages; (serenatas) fill the moonlight nights. For those who prefer discos, there is a choice between the two in the village. Although not possessing many tourist facilities, the island has hotels of good quality with cuisine based on excellent fresh fish and seafood. Cross-country vehicles can be rented for excursions. Recently, in Morro, at a few hundred meters from Vila, a tourist village has been built, consisting of bungalows. It has also a runway for planes of small dimensions. Air links with the capital are daily and facilitate connections with the other islands and abroad.

Safe and calm waters, with their products caressed all year by the sun, are the principal attractions of this island. Whether you seeking serenity, get away or both, the island of Maio has it. A sea of tranquility right here on earth. 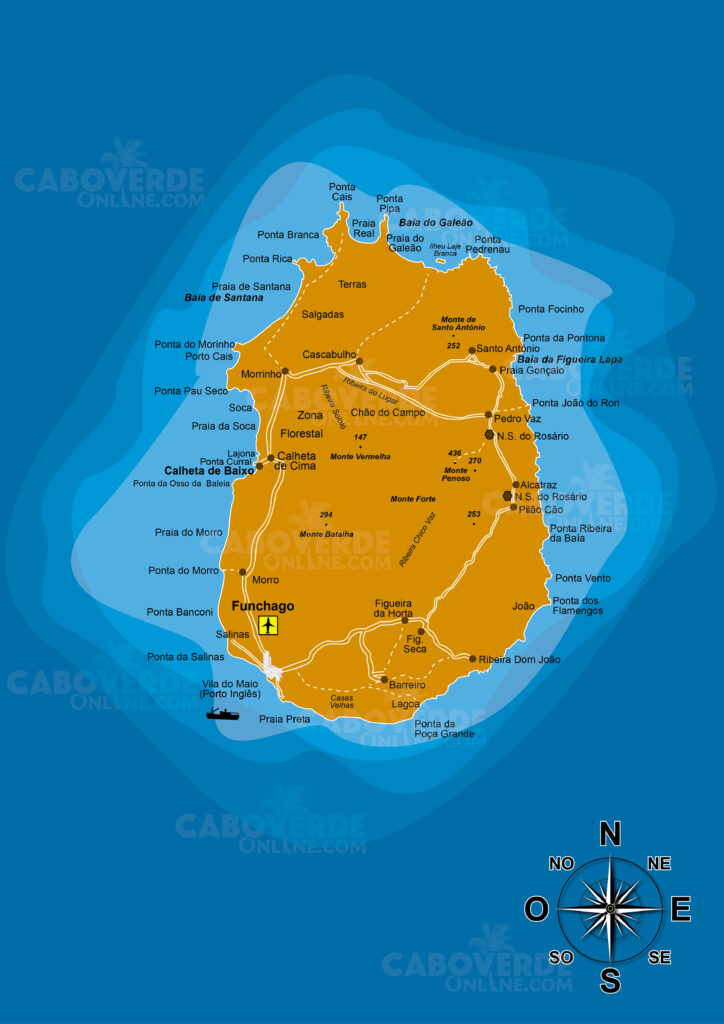 Weather data of this location not found. 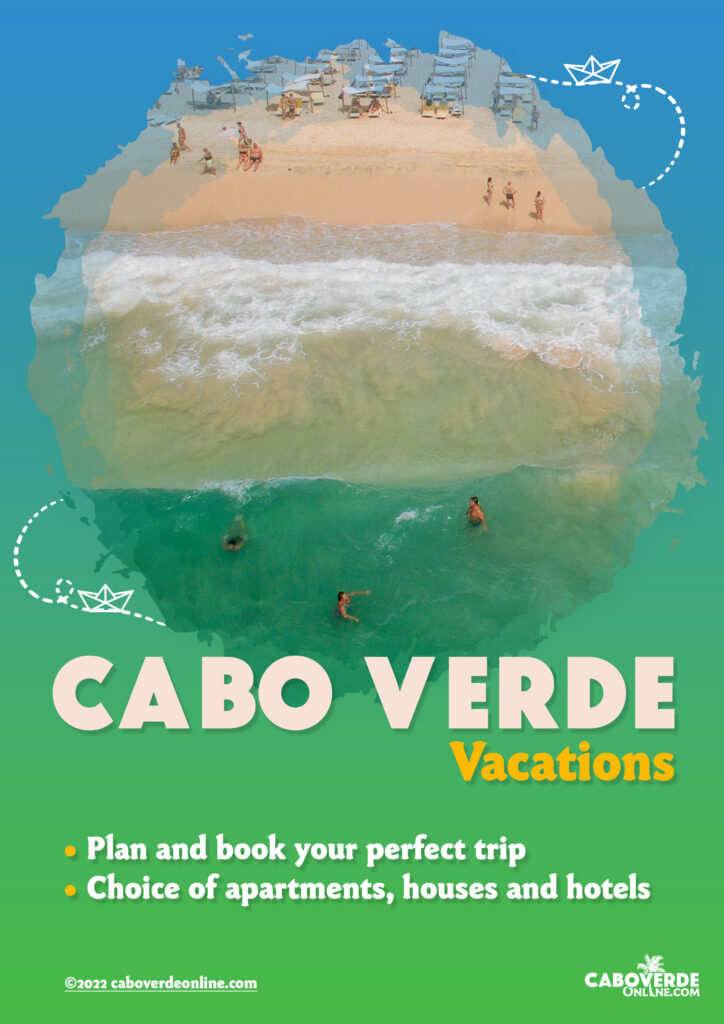 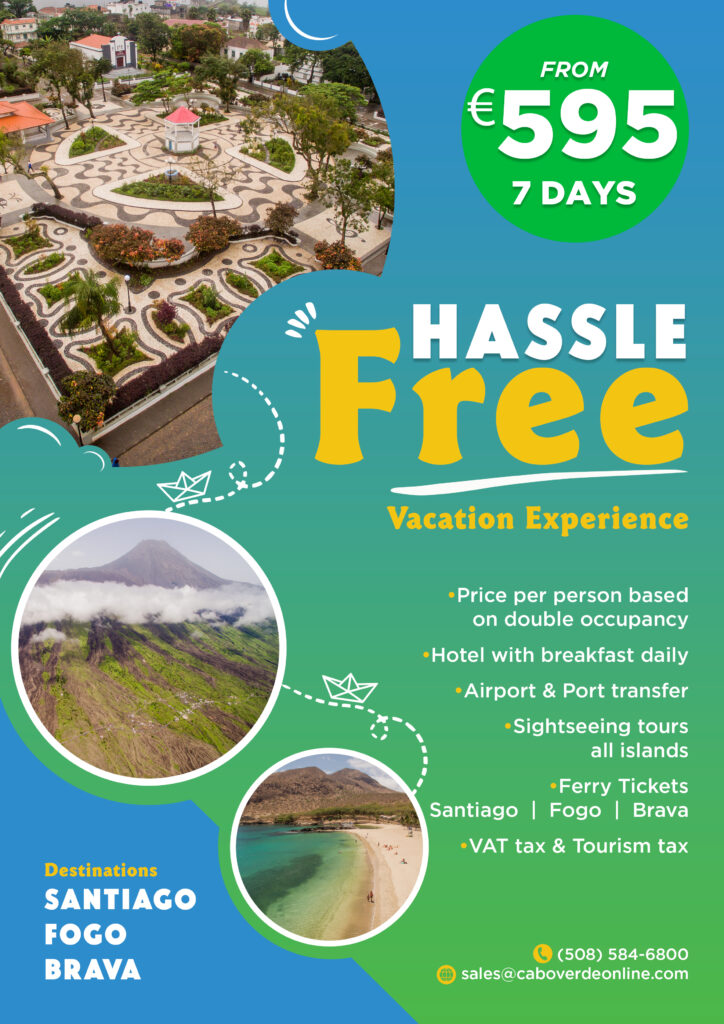 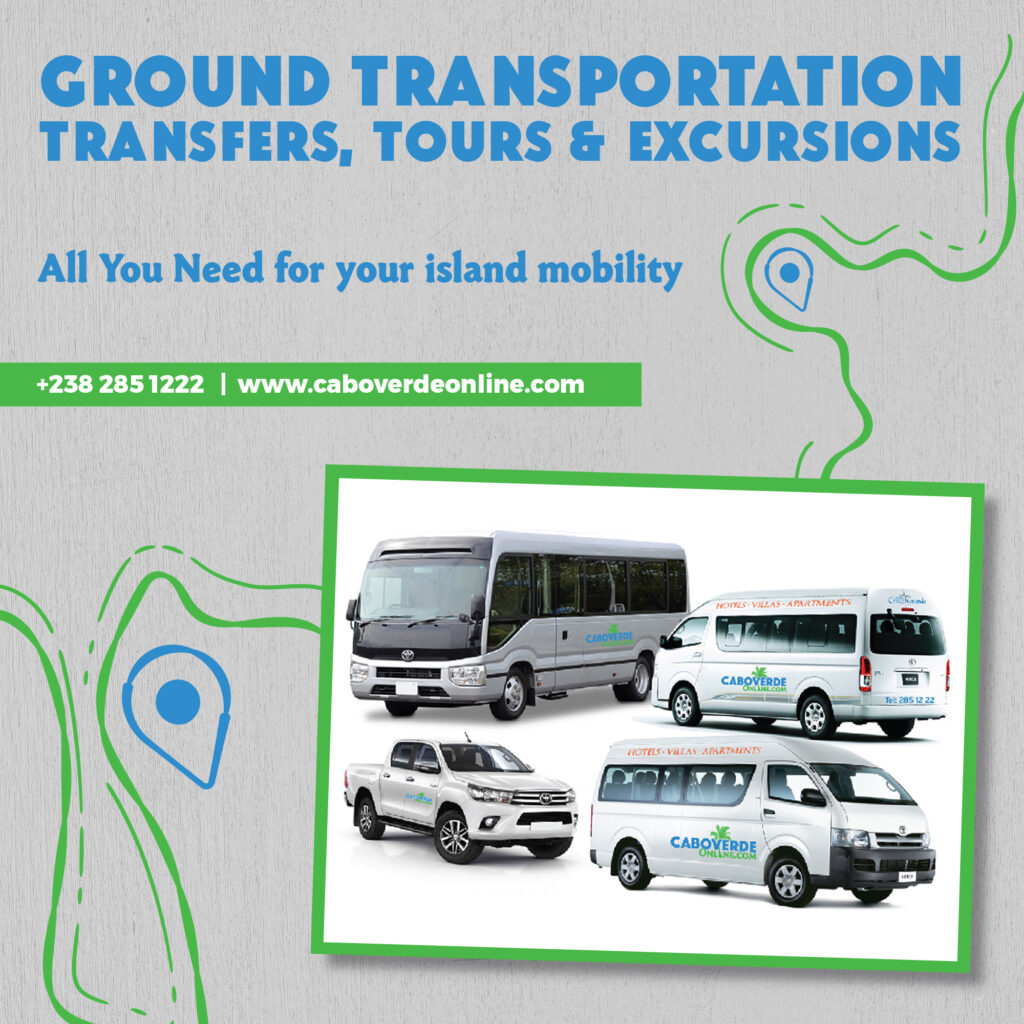